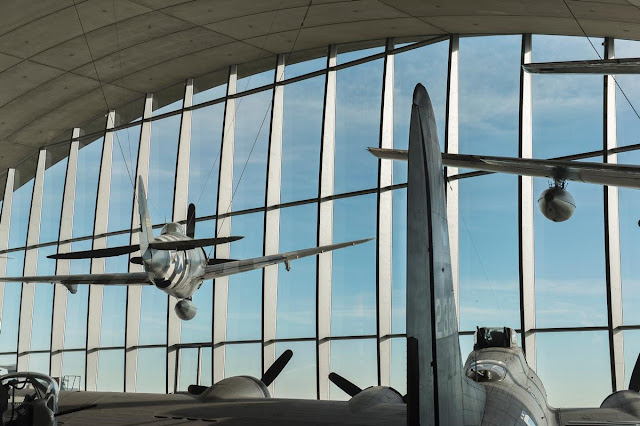 18 aircraft occupy the building Imperial War Museum Duxford
The Imperial War Museum (IWM) in Duxford, UK, is about to relaunch its American Air Museum following a five-year redevelopment project, switching the focus of exhibits from the aircraft on display to a collection of extraordinary people linked with those machines.
Reopening to the public on 19 March, IWM’s newly-transformed American Air Museum has undergone a £3m (US$4.2m, €3.8m) redevelopment, with financial support provided by the Heritage Lottery Fund (HLF) and exhibition redesign by UK-based Redman.
As part of the project, the front section of the museum's Norman Foster-designed 70,000sq ft (21,300sq m) home – which won the 1998 Stirling Prize RIBA Building of the Year Award – was removed so planes could be shuffled around, before being restored.
“The project has taken five years to develop, with the museum being closed for one year of that time,” project leader Jennie Cousins told CLAD.
“We’ve taken advantage of the redevelopment to do some important conservation work on the aircrafts themselves, but more importantly we’ve re-presented the museum to tell the stories of people connected with the aircraft. We really wanted to change our approach, change the way we looked at the aircraft. Obviously they’re dominating and impressive machines but they’re operated by people and that’s what we wanted to look at."
source: Clad