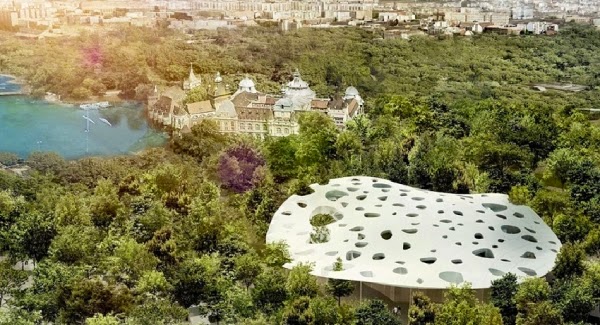 Was selected Japanese architect Sou Fujimoto office design as one of three architects selected to design buildings for the complex of the Hungarian Museum in Budapest City Park.
Option was signed on building design Fujimoto Hungarian Music Center during the competition process is designated to become one of the five new museums planned for the park outside the center of Budapest.
Planned part of Liget Budapest project one of the largest museums in Europe and the development of projects.

Japanese architecture proposed glass-walled building covered under a large white canopy remember the huge mushroom, interspersed with rounded openings create manipulator continue in some locations even ground.
The new museum will be built somewhere existing building will be torn down.
It also will create other projects in the complex new headquarters of the Hungarian Museum of Photography, which will be the name of FotoMuzeum Budapest along the Hungarian Museum of Architecture and both buildings will be designed by the Hungarian company KÖZTI Architects & Engineers.

The French studio Valet de Martinis DIED Architectes has been selected to design the Museum of descriptive anthropology. The fall of the three buildings in the Fifty-sixers Square.
The complex will be complete by the new National Gallery and the Museum Ludwig, but is not naming architect of this building because the jury was unable to find a suitable candidate among eighty proposals submitted to it will be the announcement of a new contest.

Interview will be expected from each of the proposed buildings to sustainable construction techniques show that also fit in with the natural heritage and historical building of the park, which allegedly was the first public park in the world.
It is expected that the establishment of the development project worth 190 million pounds sterling starts at the beginning of 2016, with the opening of museums determine a date in March 2018. According to the organizers, the park vegetables rate will increase by 5%.