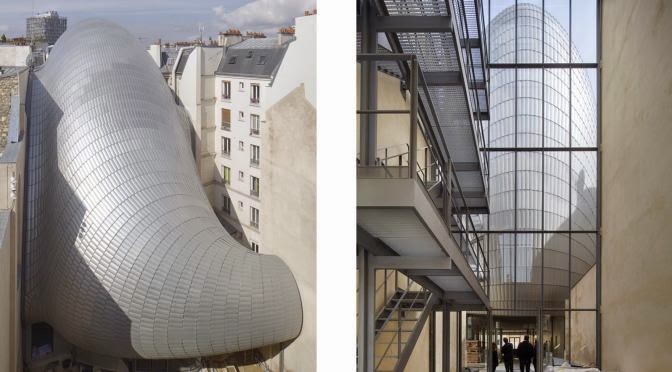 The art of inserting a new building into an historic city block means engaging in an open, physical dialogue with the existing city buildings. Building onto a structure also presents an opportunity for a wideranging renovation project, a reclaiming of space.

The new headquarters of the Fondation Jérôme Seydoux-Pathé is an unexpected presence, a curved volume glimpsed floating in the middle of a courtyard, anchored on just a few supports.

It is complimented by a group of birch trees, a floral island set in the dense mineral context of the city. The Fondation Jérôme Seydoux-Pathé is an organisation dedicated to the preservation of Pathé’s heritage, and to the promotion of cinematography.

Its new headquarters sits at the centre of a block in Paris’ XIII arrondissement, where a mid-19th century theatre – transformed into one of Paris’ first cinemas in the mid-1900s, radically transformed again in the 1960s – once stood.

The new building, which will be finished over the next few months, will house Pathé’s archives, exhibition spaces for temporary and permanent collections, a 70-seat screening room, and the Pathé Foundation’s offices. The project called for the demolition of the two existing buildings to create an organic shaped ‘creature’ that better responds to the restrictions of the site.

The idea was to respond to the functional and representative programme requested by the Fondation, while at the same time increasing the quality of the space surrounding the new building.

The facade on the avenue des Gobelins has been restored and preserved, for its historic and artistic value. Decorated with sculptures by a young Auguste Rodin, it is not only a historical landmark, but also an iconic building for the Gobelins area.

A new transparent building just behind the street facade that looks a little like a greenhouse, is the public area of the Foundation. From this building visitors have a view through the transparent ground floor of the second building in the courtyard that houses the project’s main activities, to the garden beyond.

The peculiar design of this building is determined by the limits and requirements of the site. While keeping its distance from the surrounding buildings, the new building actually improves its neighbours’ access to daylight and air and by reducing the building’s footprint, the project creates space for a garden at the back of the site.

The upper part of the building is made of glass, providing natural light for the Foundation’s offices. From the street the building is glimpsed through and over the restored façade – a discreet presence during the daytime, it will softly glow at night.