The project, which will create new public realm, is one of the largest urban transformation schemes in Sweden / Foster + Partners
Construction has begun on Foster + Partner's billion dollar transformation of one of Stockholm’s oldest locks into a dynamic urban quarter.
The project, called New Slussen, was won by the studio following an international competition. Their masterplan is to convert the city’s Slussen – the sluice that separates the sea from the freshwater of Lake Mälaren – into an attractive new public realm.
The project is one of the largest urban transformation schemes in Sweden. Slussen – which currently separates Stockholm’s central islands and the heritage site of Gamla stan – was built in 1642 and covered in a concrete road structure in the 1930s. Erosion has severely damaged the site, however, and Foster + Partner’s scheme will implement new infrastructure minimising the threat of flooding and improving access for road vehicles, pedestrians and cyclists.
A planned civic quarter, which has been designed as “the city’s new meeting place”, will include prominent public buildings, restaurants, cafes and cultural amenities. A ‘Water Plaza’ will also feature – creating a pedestrianised public space arranged around the new navigation lock and realigned quayside.
The architects have spoken about retaining the site’s historic character, and an intensive period of public consultation took place before the start of construction. The design was developed in collaboration with the City of Stockholm and SEK12bn (US$1.4bn, €1.3bn, £1bn) has been invested in the project.
“The City of Stockholm has truly embraced a wonderful opportunity to re-establish and reinforce the vital link between the central islands of Södermalm and the Gamla stan, rehabilitating the historic fabric of the city while creating a lively new urban destination for all,” said Spencer de Grey, head of design at Foster + Partners.
“This is a once in a lifetime undertaking in a uniquely significant and spectacular setting. We are honoured and very proud to be a part of this incredible and visionary project.”
Foster + Partners  Stockholm  Sweden  Architecture  Design  Urbanism  Public Realm 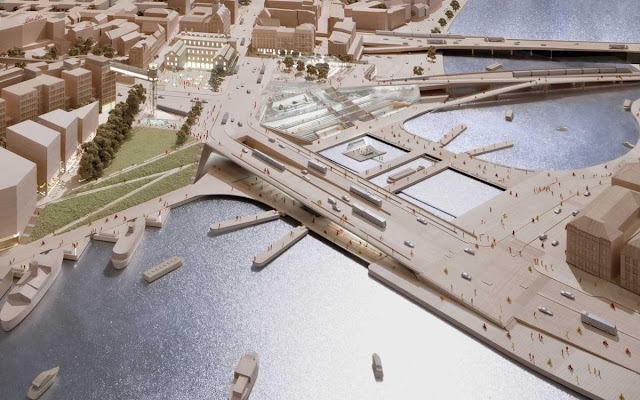 The design was developed in collaboration with the City of Stockholm and SEK12bn (US$1.4bn, €1.3bn, £1bn) has been invested in the project / Foster + Partners