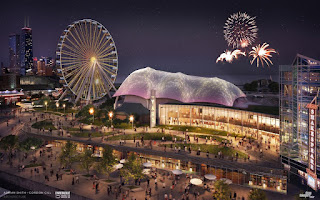 The Chicago Shakespeare Theater is expanding its footprint on the city’s iconic Navy Pier, with US$35m (€32.2m, £24.9m) being used to develop a flexible third stage capable of being adapted based on the performance.
With audience capacity ranging from 150 to 850 in an enclosed space beneath the domed Skyline Stage area, the theatre, known as The Yard at Shakespeare, will have the capability to project images onto the underside of the dome itself. The expansion will be connected to the existing facility, which currently houses two theatres through expanded lobbies.
Chicago Shakespeare has appointed UK-based theatre and acoustics consultancy firm Charcoalblue, and Chicago-based Adrian Smith + Gordon Gill Architecture to lead the project’s development.
The design repurposes the Skyline Stage by constructing a fully enclosed indoor theatre, utilising the existing stagehouse and backstage support spaces. A radical ever-changing performance area will be created with a movable set of audience “towers”. Each mobile tower rises three storeys, with the design also incorporating extensive theatrical technology into each structure.

“Creating this state-of-the-art performance venue is another step in the redevelopment of Navy Pier to ensure that it remains one of Chicago’s premier centres for commerce but also for culture,” said Chicago mayor Rahm Emanuel. “There is no better time to announce this new performance space than in the year when we will bring local and international artists together for Shakespeare 400 Chicago, which will keep the spirit of Shakespeare alive in our schools and on our stages. I look forward to watching The Yard at Chicago Shakespeare become one of Chicago’s next great cultural jewels for years to come.”
Projected to open in late 2017, The Yard at Shakespeare will sit next to the pier’s under-development US$26.5m (€24.4m, £18.8m) Ferris Wheel. Navy Pier Inc – the not-for-profit organisation which manages the pier – is contributing US$15m (€13.8m, £10.6m) towards the cost, with that funding coming from a US$46.5m (€42.8m, £33m) tax-exempt bond issue which is also covering the costs for the wheel.
The theatre expansion is the latest in a series of developments for Navy Pier – which this year celebrates its 100th anniversary – including the recently announced US$45m (€42.5m, £30m) Chicago Blues Experience by BRC Imagination Arts. The pier is a tourist hotspot and on average welcomes 8.5 million visitors each year.
A US$278m (€255.9m, £197.6m) masterplan by James Corner Field Operations, aimed at luring more local visitors to the pier, is being part-funded using US$115m (€105.8m, £81.7m) in tax funds from the Metropolitan Pier and Exposition Authority. So far the pier’s south walkway has been given a facelift, while the food court now features more upscale and local produce.
Further planned projects include a new park, bicycle flyover, a redeveloped family pavilion, an expanded Chicago Children’s Museum and a 225-bedroom hotel.
This year marks the 400th anniversary since Shakespeare's death, and a number of attractions are in development to pay tribute to the Bard.
Details recently emerged of a new £750m (US$1bn, €968.7m) mixed-use destination for London on the site of an Elizabethan theatre where Romeo and Juliet and Henry V were performed for the first time.
Artefacts from the theatre found during the ongoing archaeological dig will be excavated, preserved and displayed at a new heritage centre and visitors will be able to walk above the excavation site via a glass platform and watch scenes from Shakespeare plays via augmented reality. The vision for the new theater focuses on resourceful, sustainable and adaptive design