to design a modern library in Copenhagen 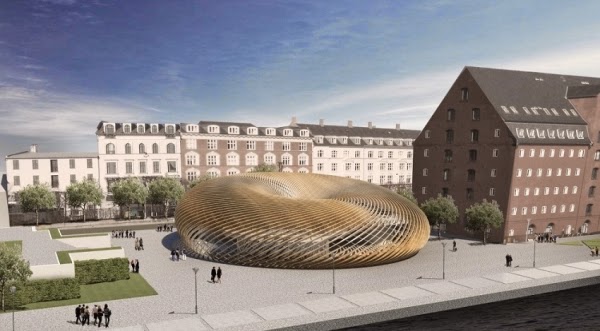 The Sang-Uk & Hyun architectural office with the participation of a proposed design that participated in the contest AWR Copenhagen New Modern Library Competition to secure design for the library of the city of Copenhagen, the Danish part of the site, which is surrounded by the sea and the park and the city.
Design submitted by architects propose a semi-circular building in the middle of the courtyard seems annular form similar to that piece of candy and donuts interfaces of ribs is a constant eye on the full-sized.

"Reflects the shape of the building and continued expanding from everywhere to everywhere the idea of movement. As is the case with traditional buildings in Denmark found in the library inner courtyard ... as well as the facade and roof and internal arena heavenly aperture are all composed of nested system, which in turn allows the light of day refinery within blanks creator air Misra. "According to the architects.
Public spaces are located with the wide lobby and rooms lectures and multi-media as well as books, shop and cafeteria and cabinets are all on the ground floor. The spaces on the first floor reading and library are found where overlooking the panoramic views of the city with the flow of the refinery to the light of day.

The architects studying the projections on the principle of open projected with oval create barriers within the space of a briefing Spaces most privacy policy or that require an atmosphere of tranquility and isolation.
As has been the interior spaces are designed to fall slightly from the front lines in order to create a vacuum break is a double entrances on the ground and in the first Turasah balconies.
"Little Library relaxed atmosphere amid the unique nature of the Danish culture 'HYGGE'." In the words of architects.
The building of 1700 square meters.