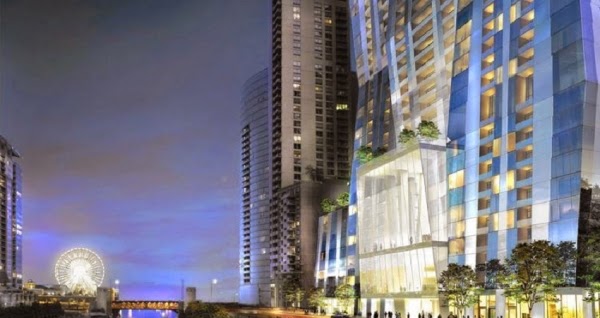 Samples of American city of Chicago architectural bureau Studio Gang Architects to work a huge project to develop a mixed-use on the bank of the Chicago River.
Development named "Wanda Vista" project consists of three contiguous towers and too long at a cost estimated $ 900 million is expected to become the third longest city buildings.
It reaches an elevation of the longest section of the triangular building 1,148 feet and 88 storeys, the number is less than the original number of floors, which was rumored to be 89 due guesses command to do with the figure 8 luck in Chinese culture and the fact that a Chinese developer.

Photos binoculars project appear three towers contiguous gradual rise from the shortest to longest interfaces undulating glass sharp angles rotate the projections with each tower adjacent to create the appearance Aikaia consistent with the gradient.
Been identified office glass Bmochor punctuated by massive concrete pillars include a restaurant and bar and relax places.
The project is located within the largest development project Lakeshore East, which covers an area of 28 acres where the project will include Wanda Vista Towers five-star 550-room and 390 housing units, a hotel with retail space with an area of 9000 square feet.
"We have allocated Chicago mayor a great deal of time and effort in order to ensure that we open Odhiratna and make this city for international business and international visitors." According to the spokesman told the Chicago mayor's name.
The project is expected to be completed in 2016.