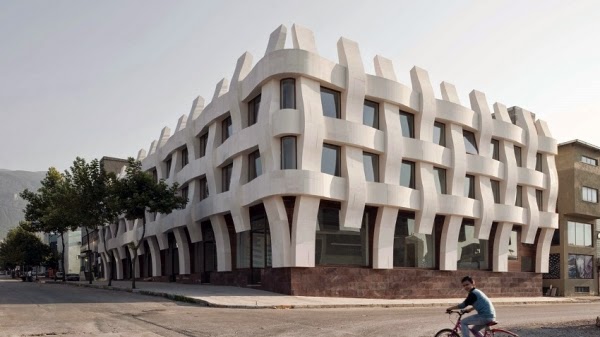 Argul Weave building or located translates as "Urgull fabric" in the Turkish city of Bursa known historic textile industry in Turkey; and the industrial heritage came the idea of interface design this building at the intersection of two streets main manufacturing center in the city, county angle.
Valsbon fabric distributor owns a factory adjacent to the east of the project site; the building has been planned to be a mixed-use building attracts global textile business with the intention of directing the focus on the region node arrived a leader in the textile industry.

And therefore the architects of Building INnovation company Arts Architecture ((BINAA design of the building with an area of 14 760 square feet spread over three floors Hattqa retail shops on the ground floor and offices on the first and the second with a rooftop restaurant.
In order to satisfy the customer's vision focused on the design rich traditions of Turkish and tissues produced by a single weave of huge metal beams clues on interfaces, making the collection of elements of the project within a unified vision homogeneous declare the importance of the region and the industry that encompasses.

Architects also went on to retain the material and color choices in its simplest form in order to emphasize the continuity and sculptural design.
EXA was huge metal beams that are "texture" facade pieces of Turkish marble Batara of Burdur, which was manufactured in the Turkish city of opium, the building platform has been Xsaaha marble Turkish Aegean dark red.
While the EXA internal aspects of the "fabric" wood facade Alairoko African-colored reddish-brown.Thus was created a sense of rhythm continuous pattern along the interfaces thanks woven abroad warm sense of moving from outside to inside the pattern generated by the wooden cladding.
Implement the design on a unique collaborative process adopted included a variety of team members stationed in various places around the world. Where are detailed digital technologies to adapt to local practices for creating and manufacturing has been the use of digital models for precise control and the structural composition and to estimate material costs.